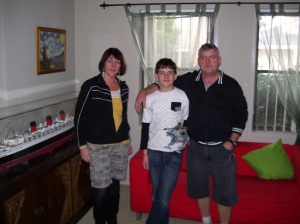 That is what I have been asked. Some people
( thankfully, not the whole world and not everyone I meet) know I have a lost a heap of weight, over a five or six year period.

A heap? About 35 kg, about 80 lbs. I say about as I didn’t often weigh myself at my heaviest, and I know that I was probably a lot heavier and had lost some weight before I first weighed myself.

Thankfully? Well, because it is just way too embarrassing to talk about weight. Putting the truth of my weight gain and loss on my blog this past Lent was like coming out of the closet, I am sure.

Anyway, people want to know how to start. It is often the first step that is the most difficult.

I agree with Lisa Delaney from Secrets of A Former Fat Girl. She advocates starting with one thing and letting that one thing be exercise. Well, maybe two things ( Would you believe two things? asks Maxwell Smart in Get Smart).

Delaney’s advice? Exercise and a mantra. Something that helps you not give up. Something inside that clicks.

First things first. Why exercise? Well, when we are overweight we are often more sedentary so any extra exercise will help automatically with creating a calorie deficit and causing a weight losss. Plus, it makes you feel good – eventually. It changes your image of yourself, from one who hates working out to one who is a fitter person ~ eventually.

All good things come in time, to those who work and wait…..

For me, my first workout to lose this weight was walking. Yes, I had been a lot fitter in the past, I had been to aerobics classes and done Jazzercise and weights and Jane Fonda and Denise Austin. But those were in my overweight but not obese days, or my thin but trying to be thinner days. Or my eating disorder days…

I have had a problem with food and body image all my life, since my first mother-sanctioned extreme diet at age eight.Probably before that,even…I can’t remember a time when I didn’t think I was fat, regardless of weight. And those Extreme diets just so don’t work for me , and for most obese people,I suspect.

So this time, it was going to be different. I was starting with small steps, with walking. Started at fifteen minutes, worked up to thirty then forty five than sixty. And then got into kickboxing.

But starting small, with walking, helped me change how I felt, and made me feel good and got me fitter. I walked outside, rain or shine. I walked in the morning, or as soon as I could, given my schedule. I bought some indoor walking DVDs for the days I couldn’t leave the kids – I have some Leslie Sansone’s if anyone wants to borrow them!

One thing, exercise. Two things, exercise and that mantra. That mantra, that inside saying that lit my fire and helped me keep going, that was important, too. Just as Delaney said. Her’s was/is INO ~ It’s Not An Option.

Make your positive statement part of your life, your little self discipline, so you won’t give up on that exercise. Or on yourself.

We are what we repeatedly do, excellence then is not an act, but a habit.

Well begun is half done.

How to start losing weight? Start with walking or some other form of exercise. Make a conscious decision to do this daily or three or four times a week. Work on that mental click, that mental saying or determination, that won’t let you give up. Use this exercise time for prayer – I used to pray my Rosary while walking. Develop that self dicipline.

It is not easy. I give you that. I hate it when you read books that tell you – just eat less and move more. Yeah. Right. This doesn’t address the physical issues that obese people have, the mental issues, the mind stuff. The feelings. The spiritual connection. Time. Organisation. How to.

Sh*t! If it was easy we’d all be like Twiggy or Madonna. NOW.

By the same token, it is not as difficult as some other books make it. You don’t need to make huge changes ,you don’t have to give up wheat or dairy or chocolate or God forbid, alcohol! Start small. Work on exercise and mental stuff, then address food and food issues. Lower fat, lower GI, healthy choices 80% of the time, portion control…Stopping ZOMBIE EATING.

One by one, step by step.

P.S. Zombie eating? From the blog of The Amazing Adventures of Diet Girl ~

People talk about comfort eating or emotional eating but what about ZOMBIE EATING? I’ve found myself at the Cookie Table at work, staring down at the crumbs on my chest and thinking, What the hell happened there!? The feet and hands and mouth took over before the brain could make the connection between receiving the stressful email and grabbing the biscuits.

Other times I’ve been glassy-eyed in line at a coffee shop, fixated on the idea of my hand wrapped around a hot cardboard cup of overpriced beverage to soothe an undefined troubled feeling. Then I’ll take the first sip and come back to earth… Shit! What did I do that for!?

Back at McDonalds, I was jolted out of my reverie by the dulcet tones of a lady customer, “Arrriiiight hen, gis a Big Mac meal wi’ Diet Coke!”

I took in the spotty lad behind the till and the swaying drunks in the queue. Fark! How the bloody hell did I get here?

I left, walked home in the rain and watched telly.

Most times I have the ability to stop, tune in and realise I’m just stressed or anxious or bored or needing to pull a Greta Garbo – and therefore not shove something unnecessary in my gob. But sometimes I don’t even register that I’m feeling anything at all. It happens so fast and mindlessly that I don’t wake up in time.

I work, I sing, I dance, I write, I do yoga, I study, I pray. I am a lifetime unschooler. View all posts by leonieaw

10 thoughts on “How to start losing weight”